The Forgotten Kingdom: A Novel (The Lost Queen #2) (Hardcover) 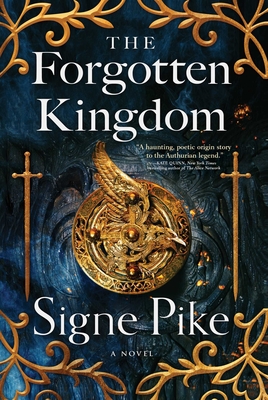 From the author of The Lost Queen, hailed as “Outlander meets Camelot” (Kirsty Logan, author of Things We Say in the Dark) and “The Mists of Avalon for a new generation” (Linnea Hartsuyker, author of The Golden Wolf), a “rich, immersive” (Kirkus Reviews) new novel in which a forgotten queen of sixth century Scotland claims her throne as war looms and her family is scattered to the winds.

AD 573. Imprisoned in her chamber, Languoreth awaits news in torment. Her husband and son have ridden off to war against her brother, Lailoken. She doesn’t yet know that her young daughter, Angharad, who was training with Lailoken to become a Wisdom Keeper, has been lost in the chaos. As one of the bloodiest battles of early medieval Scottish history abandons its survivors to the wilds of Scotland, Lailoken and his men must flee to exile in the mountains of the Lowlands, while nine year-old Angharad must summon all Lailoken has taught her to follow her own destiny through the mysterious, mystical land of the Picts.

In the aftermath of the battle, old political alliances unravel, opening the way for the ambitious adherents of the new religion: Christianity. Lailoken is half-mad with battle sickness, and Languoreth must hide her allegiance to the Old Way to survive her marriage to the next Christian king of Strathclyde. Worst yet, the new King of the Angles is bent on expanding his kingdom at any cost. Now the exiled Lailoken, with the help of a young warrior named Artur, may be the only man who can bring the warring factions together to defeat the encroaching Angles. But to do so, he must claim the role that will forever transform him. He must become the man known to history as “Myrddin.”

“Intrigue, rivalry, and magic among the mists of old Britain—The Forgotten Kingdom is an enchantment of a read!" (Kate Quinn, New York Times bestselling author).

Signe Pike is the author of Forgotten Kingdom, The Lost Queen, and the travel memoir Faery Tale, and has researched and written about Celtic history and folklore for more than a decade. Visit her at SignePike.com.

“[A] work of epic fantasy with ties to the Arthurian legends.”
— Bustle (The Books Everyone Will Be Talking About All September Long)

“Her prose is quick on its feet, begging you to keep reading, joining the characters on their journeys to learn about themselves and the changing world where they live. There are passionate lovers, evil enemies and quite a few powerful women. And, like so many novels set in medieval times, The Forgotten Kingdom is anchored in the rhetoric of glorious battles, both lost and won.”
— Charleston City Paper

"In the second book of her epic trilogy of sixth-century Scotland, Pike adeptly balances brutal power struggles and Celtic mysticism… readers will relish the escape into Pike’s fully developed milieu while seeing its connections to Arthurian legend grow more prominent as, among other aspects, Lailoken serves as a historical model for Merlin.”
— Booklist

"Signe Pike pens a haunting, poetic origin story to the Arthurian legend, following the twisting paths of a young seer in training, a courageous queen stranded on both sides of a vicious war, and her battle-haunted brother who will someday don the mantle of Merlin. Intrigue, rivalry, and magic among the mists of old Britain—The Forgotten Kingdom is an enchantment of a read!"
— Kate Quinn, New York Times bestselling author of The Alice Network

"In The Forgotten Kingdom, a dramatic and feverishly paced continuation of her Lost Queen trilogy, Signe Pike brings medieval Scottish history compellingly to life. As the narrative follows Languoreth through grueling captivity, loss of security, violent separations from loved ones and pervasive fears that shake her to the core, we learn much about loyalty, devotion, endurance and personal courage. Pike’s fans will be thrilled and captivated."
— Paula Mclain, author of The Paris Wife and Love and Ruin

PRAISE FOR THE LOST QUEEN

"Outlander meets Camelot – but with the focus firmly on the lives and loves of women. A sweeping, magical tale of a rarely-told part of Scotland's history."
— Kirsty Logan, author of The Grace Keepers

"The Mists of Avalon for a new generation. Pike vividly recreates both the magic and brutality of early medieval Britain, replete with betrayals and love affairs, battles and escapes, and an unforgettable heroine at the center of it all. A gripping historical novel."
— Linnea Hartsuyker, author of The Half-Drowned King

“An extraordinary historical page-turner. Pike brings a creative eye, unique voice and immaculate research to the world of historical fiction - the people and lands of this novel will not leave me. The Lost Queen is more than a book; it is a profound experience. Languoreth has emerged from the mists of Scotland to assume her rightful place on the throne where she belongs.”
— Patti Callahan Henry, New York Times bestselling author of The Book Shop at Water's End and Becoming Mrs. Lewis

“THE LOST QUEEN, Signe Pike’s debut novel set in sixth-century Scot­land, is the rare historical epic that manages to be truly sweeping and yet always intense and person­al—at once a romance, a story of faith, a story of war and a story of family... By the end, you feel happily lost in this mist-shrouded place in history, and you only wish you could stay there longer. Moving, thrilling and ultimately spellbinding, THE LOST QUEEN is perfect for readers of historical fiction like Jean M. Auel’s The Clan of the Cave Bear and Wolf Hall by Hilary Mantel, and for lovers of fantasy like Outlander by Diana Gabaldon and The Mists of Avalon by Marion Zimmer Bradley.”
— BookPage

"Rich in detail and elegantly written, The Lost Queen is a boldly feminine heroic journey to a place and time of unbearable change. Hypnotic and sensual, Pike’s story reawakens us to something long ago lost between landscape and memory, where the Old Way still exists, and the bond between brother and sister cannot be broken. Mystical, beautiful, and destined to become a classic."
— Brunonia Barry, author of The Lace Reader and The Fifth Petal

“Epic… This book [has] magic, romance and adventure.”
— FIRST for Women

Open to foot traffic (masks optional if you are vaccinated)